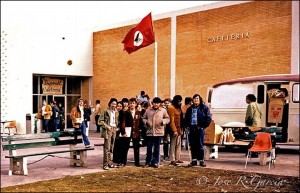 The other day I gave a presentation to teachers in Moorpark. Like always you can predict the question and answer period. More often than not you get friends in the audience who don’t ask questions but give speeches instead of questions.

Everyone wants to be a presenter, and activists feel more entitled than most to promote their point of view.

Moorpark was no exception, and an old time friend from the San Fernando Valley was chomping at the bit to promote his cause and his perspective. My friend is a cheerleader, so I settled back realizing that this is a very important function of the Left. We get so few spaces to reach out to people outside our orbit.

You also learn a lot from the speeches, such as what tendencies or lines different groups are pushing. In this case my friend asked or better still stated that the Latino critics of the immigration bill were jeopardizing the passage of an immigration reform bill. I was taken aback because this is the kind of rhetoric usually used by the Right to silence the Left.

I shot back that I was a critic of what was coming out of Washington on immigration reform. I have not played the game of follow-the-leader since childhood – quickly rattling off what was wrong with the proposals: no quick and just pathway to citizenship, a jingoist and racist border security policy, and a neo-bracero program.

History shows that the wrongheaded logic of a half a loaf of bread is better than none results in none.

I realize that I am getting old (but not senile), but since when is losing winning?

Last Saturday we had a reunion of Chicana/o studies alumni at California State University Northridge where we screened “Unrest” – the story of the founding of the department. With only a little over a month to organize and zero funds, we were surprised when over 300 attended (not enough food).

In the documentary I was asked why it was so important that I had a PhD and a quick path to tenure. I replied because I had to be secure that I could tell administrators and white faculty to go to hell. The decision to play it fast and furious was very important to the success of the CSUN Chicana/o Studies department which offers five to ten times as many classes as the next most populated programs.

My feeling was that I did not take the leadership in a program to lose. A department had to have a full complement of courses and the teachers to teach them. Anyone who stood in our way had to be taken on.

I always felt that if we could not be the best then I should not take the job or sell out and go into a traditional department in a prestigious university where my pension would have been much higher than at a state college. Besides if money was the issue, I could have made much more money in sales than in education.

Looking back at the students that have gone through the department and the Education Opportunities Program, they have done so much more collectively than I could have done as an individual. I was never good looking enough to be a movie star.

This brings me back to the game of Follow-the-Leader. The purpose of education is to produce leaders. To produce leaders who think and are not copycats. Issues such as the current immigration bill are too important for us to settle for a half loaf of bread; for us to compromise even before a vote is taken.

We should learn from history. Ask questions such as why other programs are not as large as the CSUN Chicana/o Studies department? We should ask if our leaders have led? Looking at my former students on April 27, 2013, I realized that it was because of them that we have had a measure of success. They were too raw, too idealistic to accept that losing was winning.