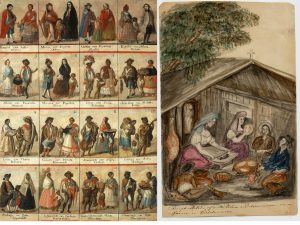 —Rudy AcuÃ±a
In exploring neoliberalism it is instructive to look at the past. During the Colonial Period in New Spain, the Spanish governed through an organizing principle of racial categories, a sistema de castas. The system of castas was more than socio-racial classification. It was labelled a sociedad de castas. Today it is still used and Mexicans naively use the classification mestizo rather than Indigenous. The castas socially ranked the mixed-race people. Its attraction is witnessed by the obsession of many Mexicans  getting DNA tests.
This system of castas in the neoliberal university is subtle. I have been asked by faculty if I have a doctorate. If I say yes they then ask, â€œFrom what university?â€ I guess they are trying to assess the value of my brand. (I attended a night school, got my PhD from USC, the only university then that offered classes after 4 p.m.) We used to have a Dean of Students named Ed Packham, called him pecker man, who had an E.D. from Harvard who always put down Harvard but slurred over the E.D. He was an asshole.
This elitism is today called professionalism. I call it  giving value to acommodity. Invariably the first thing that appears on new faculty email addresses is the Ph.D. as if it is part of their name. It is what I call establishing a brand. A Godiva Candy Bar costs more than a Hershey Bar. Adjunct faculty is kept in line by a caste system that no longer lists them as part-time but designates them as lecturers.
Resources are distributed by the overseers. If you comply, you get rewarded. Harry Hellenbrand was a master of the patronage system. Merit has very little to do with it. One year I published two books and got a one-step merit increase. Another professor got five steps and published nothing. The president said I was not a good citizen â€“ I sided with the students. Published two books in the past two years and not acknowledged. This is the way castes work and the neoliberal ensures professionalism.
It is similar to the way Congress operates. Be a good boy and you will come out of it a millionaire. Play the game and I will become a full professor. I should be happy that I am not a lecturer. I become a professional, not a worker.