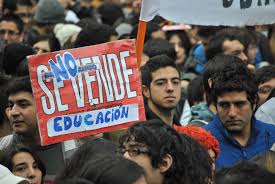 Impaction
What Goes Around Comes Around
By
Rodolfo F. Acuña

On September 11, 1973, General Augusto Pinochet in cooperation with the CIA led a military coup assassinating constitutionally elected Salvador Allende and unleashing a reign of terror that in the first year conservatively murdered over 11,000 people. By 1982 neo-liberal wunderkind Milton Friedman declared that dictator Pinochet “has supported a fully free-market economy as a matter of principle. Chile is an economic miracle”.

Pinochet along with “the Chicago Boys” — free- market economists—set out to convert Chile into a free market, reducing the role of the state and cutting back inflation. According to Pinochet, Chile would become “a nation of entrepreneurs.”

A la Ronald Reagan, Pinochet set out to privatize Chile and make education a marketplace. As a result, Chilean education became among the most expensive in the world. The outcome was dismal and Chile’s primary school system ranks 119th of 144 countries. Students could not afford “to graduate, and even those who attain degrees seldom earn enough to pay off their debt.” (Sounds familiar?)

A reason why education became unaffordable is that higher education was privatized and it received limited public funding. In 2006 students took to the streets in what became known as the Penguin Revolution – the students wore black and white uniforms, carrying signs “education is a human right.” Not seduced by minor victories, they continued to fight for free education.

Protests erupted again in May 2011 with an eight-month long occupation of college campuses. This escalated into a sustained, three-year nationwide movement. At its peak, 800,000 students flooded the streets and were supported by 81 percent of the population. 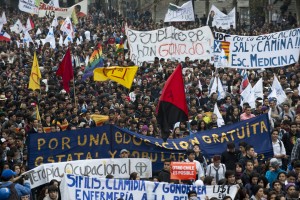 Under the leadership of Chilean President Michelle Bachelet, the Chilean Congress passed a law that by 2016 education would be free. Congress approved a corporate tax hike that will generate $8.2 billion in new revenue. (The U.S. defense budget was $581 billion in 2014). History had judged Milton Friedman and his “Chicago boys.”

What goes around comes around.

Change did not come about because the political process worked. Politicians did not conceive the change. It was the students taking to the streets and spreading the attitude, “we are fed up and we are not going to take it anymore,” that brought this about.
American students could learn from Chileans and develop a moral vision that included education as a human right. Chileans did not blame themselves for the crippling debt and the ineffectiveness of their government.
The demonstrations were nationwide and they lasted years. As one critic put it, students got politically involved and several of Chile’s student leaders serve in the Chilean Congress “whereas the US Congress is mainly composed of older millionaires, many of whom receive campaign funds from for-profit schools like the University of Phoenix.”
Another difference is that the United States is the citadel of neoliberalism where the 1 percent has achieved an ideological hegemony. The sad fact is that American students will not be effective until they share a “moral vision” that demands education as a right.

In the fall of 2015 California State University at Northridge will be designated as an impacted campus. The term “impaction” has been around for some time and can apply either to majors or specific campuses. “Major impaction means that the number of applications from fully eligible students to a designated program or major on a CSU campus during the initial filing …” Campus impaction occurs when the number of applications received exceeds the number of available spaces. However, this is not always true and neither are the consequences.

The rationale behind impaction is that by limiting and cutting enrollment campus costs will be reduced. Campuses are under the illusion that the governor, the legislature and the Board of Trustees will then increase their budgets. Impaction mainly affects first year students but includes other transferring students. The goal is to reduce the size of the university by one percent a year over the next seven years.

In theory students turned away from CSUN have the option of attending a non-impacted campus, for example, CSU Stanislaus, which may be okay for a student with substantial family support, but for poorer students of any race it is a hardship. For undocumented students, it is near impossible.

It gets more insidious with majors. At many campuses students may be admitted on a “pre-major” status. Before getting admitted to the major, the student must complete the lower division courses prerequisites for admission to the impacted major.

It is divisive and pits students against one another and divides them. Minority opposition to impaction has nothing to do with lower standards for admission. They are demanding their rights and asking for equal access to a quality education. Impaction has the potential of being a means of managing enrollment and gives racist members of individual departments the power to avoid diversity.

There is nothing new about this form of social engineering. In 1985, Chancellor W. Ann Reynolds sought raise entrance requirements claiming that this would force the public schools to offer required classes. Thanks to the Latino community, students and California Legislators opposition to Reynolds’ proposal slowed it down and in the end her initiative proved to be a complete fiasco.

The only ones that will gain are for profit colleges and rich corporations. According to The Huffington Post for profit colleges from 2007 – 2012 spent a combined $39.6 million on lobbying. By 2012 “For-profit colleges … collected $32 billion from the federal government through programs like Pell Grants, while many students failed to graduate. Among 30 companies investigated, 41.8 percent of revenue went to marketing, recruiting, and to profits while only 17.7 percent towards actual instruction.”

Meanwhile, according to The Nation Magazine, “For-profit schools are driving a national student debt crisis that has reached $1.2 trillion in borrowing.” Senator Dick Durbin (D-Ill.) has said that for-profits “own every lobbyist in town.” Mitt Romney strongly endorsed the industry in 2012; he has financial ties to for-profit colleges Vatterott and Full Sail University. In 2013-14, House Speaker John Boehner was a top recipient of for profit money.

Giving the devil his due, Provost Harry Hellenbrand resisted impaction, he lost and is retiring. I will not be alive to see what went around come around. It will take a long time because neoliberalism is too well entrenched. For there to be change, American students have to develop a moral vision – Education is a human right. 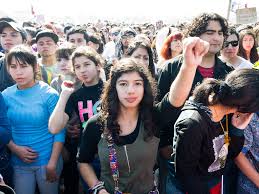