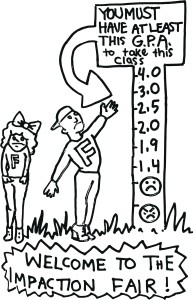 Meeting
Bizarre
The Illusion in the Making
By
Rodolfo F. Acuña  March 7, 2015

Two expressions stick in my mind from the 1960s, “Don’t Bogart it” and “It is bizarre!” The first referred to hogging a smelly little joint and the other was just an exclamation referring to almost everything and anything. It resembled the “I don’t think so” or as my East LA students would say “I don’t tink so?”

All three of expressions came to mind as I watched the impaction hearings at the Cal State University Northridge Little Theater last Thursday. It was bizarre!

It was one of four hastily organized meetings. It represented an effort to give out information about impaction. Hearings have become part of our culture. Institutions hold hearings when major decisions are about to be sprung on the public and are an effort is made to create the illusion that we are part of the decision process when in reality the institution has made up its mind and wants a rubber stamp. If there is criticism the institution has its bases covered, it held hearings.

There were about a hundred people at the hearing – community folk, students and a few faculty members. Noticeably missing were elected officials whose constituents will be impacted. To my knowledge there was not one brown or, for that matter, white elected official. There were no city councilpersons, legislators, no Alex Padilla or their aides, and, for that matter, few people of color, which is astonishing since the consequences of impaction, will close the last remaining stairway out of a life of poverty.

As I have mentioned, in a previous article a CSU campus is impacted when it is overenrolled and operating beyond its budget. In the present case, the number of freshman and transfer students admitted will be cut by one percent a year for at least the next seven years. What the hearings were about was to unveil the university’s proposed service area and changes in “admissions criteria through the use of academic freshman and transfer-level impaction for undergraduate programs.” Aside from new admission requirements designated majors will be targeted for impaction.

We have known that impaction was in the works for some time and I acknowledge Provost Harry Hellenbrand efforts to delay implementation; however, the planning for this contingency was flawed.

In the early 1970s, I wrote Occupied America. A reoccurring theme was the internal colonization of Mexican Americans; it was not so much a theoretical model but an effort to show the similarities between colonial situations that occurred throughout Africa, the middle east, Asia and Latin America and the barrios and colonias where Mexican Americans live. Pure and simple, it was about how the barrio was controlled by white teachers, white bureaucrats, and occupied by white police. Nevertheless, the popular illusion was that Mexican Americans controlled their communities.

Admittedly a lot has changed and today, for example, you see brown cops, brown teachers and brown bureaucrats. However, even in the case of brown elected officials they are dependent on white money to be elected.

At the Hearing I could see the similarities between the condition of Mexican Americans at CSUN and their Third World counterparts. The colonial sympathizers reminded me of Frantz Fanon’s Black Skin, White Masks.

At the so-called Impact Hearing there was not one Mexican American and for that matter a Latino a presenter or panelist. The dialogue was pretty much controlled by a white woman who appeared to have drawn up the standards without consultation.

The only Latinas/os in the audience were a few community folk, students and five Chicana/o Studies faculty. I asked the Chicana/o faculty if they had been consulted about the standards, none had. Of the outreach people, the administration had only talked to one of them but they did not involve him in drawing up the priority area or the formulation of the standards.

Then who is the administration consulting? I assume Latinos and Latinas on the administrative staff – there are three. I have my problems with these people since two are non-academic and one is a former member of Chicana/o studies. None have organic ties to the San Fernando Valley or Ventura County or, for that matter, the Greater LA Area. None of them have worked in the community unless you call going to a meeting, a fundraiser or managing a contract being part of the community.

This became clear when they unveiled CSUN’s proposed Tier One area. A former Mecha Chair rose to object to dropping Moorpark and Santa Paula from our service area. True the Simi Valley was also dropped, but it is much more affluent. It did not make sense to the student that the planners did not to take into account the geography and demographics when CSUN dropped Northern Ventura, which is about a half hour away and made Malibu and Agoura (wealthy areas) part of CSUN. (Agoura is 20 minutes from Channel Island).

I have spoken to community members from Oxnard and they were not aware of the changes. A reasonable person would have thought that these constituencies who have supported CSUN for so long would have been consulted.

CSUN prides itself in being an Hispanic Serving Institution. It has gotten a lot of mileage from it. However, I have not seen the administration reaching out to students and fully informing them of the dangers of impaction. It prides itself in having a press secretary who is Latina but who has no connection to the Mexican American faculty, students or community. It would seem reasonable to have a series of Hearings involving students with full page ads in the student newspaper announcing them.

Students have the right to know. And you would have thought that the administration had learned something from its acrimonious confrontations with Chicana/o Studies over the lack of consultation on the UNAM deal.

Students and community also have the right to know how they will be impacted by future events. The University of California system just announced that it will not expand the enrollment of California freshmen and transfer students in the fall unless more state revenues are appropriated. If this occurs this single event will drive how long the CSUN impaction stays in place and what the standards will be in the future. The rejection of students at the UC level will create a pushdown effect where more students will apply to CSU campuses. In many instances, the pushdown students will have higher GPA’s and SAT scores than CSU students.

It will put a further stress on race relations similar to that of public school bussing. Currently Cal State LA and Dominguez Hills are not impacted. However, these campuses are not as desirable to white students as CSUN. The San Fernando Valley still has the image of being a white bedroom community. The open campuses are less attractive because they are surrounded by Latino and African American neighborhoods.

Given these realities I do not envision many CSUN professors championing the cause of racial and ethnic diversity. Witness the fact that over seventy-five percent of academic departments do not have a single Mexican American professor and we estimate that only about 3 percent of the faculty is Mexican American. In making this evaluation, good intentions are not the issue but history is!

That this is happening in 2015 is truly bizarre. 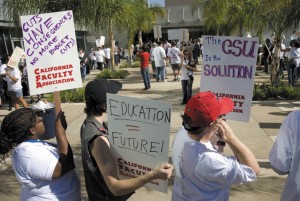