We have been fighting with the Cal State Northridge administration for some time over the privatization of the university. Today students pay $7000 annually for tuition, $300 for parking, $950 to rent a “bed” in a dorm that their student fees paid for, $3500 for a meal ticket, over a $1000 for books from the college bookstore. Today I tried to buy a small cup of coffee from the Freudian Sip and it cost $1.90; sushi over $8i. No wonder my students struggled through three jobs and were homeless. Then I see this sign from the school mascot, the Matador, saying that it was unpatriotic to buy off campus where 4 students can get an apartment $600 a piece, cook their own meals and get a cup of coffee for a dollar and park their car there. Down the street on Reseda at Shogun they can buy sushi for $3.85 an order. In my humble Mexican mind i think that it is the Matador who should be grateful. It is probably because I come from the Solent Green generation that paid no tuition and for a dollar bought a cuo of coffee with a huge cinnamon roll. 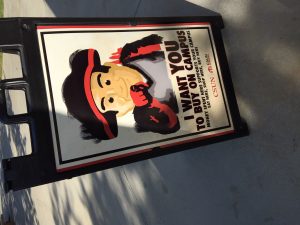