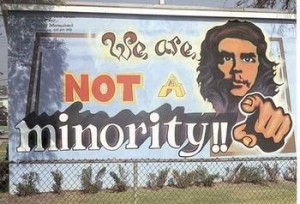 Thinking Critically Is a Victory Really a Victory? Obama’s Immigration Order and Ethnic Studies If it stinks light a match By Rodolfo Acuña 11 28 14

People want to believe, they want to have hope. Everyone loves a happy person, and that’s great but it makes critical thinking all the more difficult. It is like having a gas attack at a party. No one appreciates Mr. Doom in their midst. Most people are just making a living and surviving, and no one wants that Chicano bullshit messing up a good time.

I am very mindful of stepping on shit and getting those sniffing stares. So when I heard President Barack Obama’s announcement about signing an executive order staying the deportation of about 4.5 million undocumented parents of children born in the United States, my reaction was cautious.

Watching the White House playing out the immigration scenario has been like watching a schoolyard toughie tell someone repeatedly, “I am going to beat you up.” About the 20th time he sings the same old song you want to say to him, well just do it!

A lot of us were hopeful when Obama first said that he was going to fix the immigration mess. Indeed, there have been partial actions such as that for the Dreamers; however, at almost every step of the way he seems afraid that to alienate Republicans and Blue Dog Democrats – afraid they will not love him.

The truth be told, even before Obama gave the speech, many Latino/a immigration advocates were praising the president for “a monumental and historic undertaking”.

Obama’s plan limited it to undocumented parents who had children that were born in the United States – the parents of the dreamers would not be protected, and the order will only be in effect for as long as Obama is in the presidency.

When some critics mentioned this, the cheerleaders started lighting matches, hoping that the “sulphur smell from the match masks the fart smell from the dog.”

In this context, the recent Los Angeles Unified School Board of Education’s vote to make an ethnic studies course a graduation requirement, beginning with the class of 2019, has produced a similar euphoria among many Latina/o activists.

Student Cindy Reyes told ABC7, “We want to learn our side of the story as well.” The board’s motion calls for a phasing in of the requirement, beginning with a handful of schools in 2015-16. It will become a one-semester course by 2019.

This one is difficult to criticize because the Ethnic Studies Now Campaign and other supporters have invested an awful lot of emotional capital. Activists such as Jose Lara (AKA Jose del Barrio) have worked tirelessly. •Ibarra, a Board Member of El Rancho Board of Education got the Pico Rivera School District to adopt an ethnic-studies requirement for all students starting in 2016, and there have also been rumblings in Santa Monica and other districts.

In the summer, the hopes of the activists were raised when California Assemblyman Luis Alejo (D-Salinas) introduced a bill that require the state’s Department of Education to develop a model for implementing a standardized, statewide ethnic studies curriculum for high schools. It met with opposition and the bill was never taken to the floor.

Latinos are the largest ethnic group in California schools comprising 53 percent of the California student body (whites are 26 percent, and Asians, 9 percent). Despite this, as a rule a student learns very little about the Mexican/Latino heritage of the state.

More important and fundamental to Ethnic Studies, it leaves out critical thinking.

The California thrust for Ethnic Studies comes from the “Save Ethnic Studies Campaign” around the outlawing of the Tucson Unified School District’s tremendously successful Mexican American Studies Program that almost eliminated the dropout problem and significantly improved the attendance in higher education. They forget it was based on a pedagogy of critical thinking.

The MAS model was never intended to be merely cultural experience or courses on race theory. It was based on the research of educators such as Paulo Freire and Edwin Fenton. The goal was to produce critical thinkers.

Nevertheless, the devil is in the detail and there are a lot of pitfalls — as we witnessed in the Alejo Bill. Chicana/o legislators like Obama are with you for as long as it is not inconvenient for them. Moreover, as we learned in the Tucson campaign just calling it “Save Ethnic Studies” does not unify people and in fact builds in contradictions.

So take out the matches while I air some of my concerns:

• This could prove to be atole con el dedo – 2019 is a long way to away, and there is no funding as of yet. Will conservative members and the internal bureaucracy use the budget to kill it?
• We were further down the path with bicultural-bilingual education; what have we learned from that experience?
• One of the biggest obstacles to Mexican American Studies at the university level was our fellow teachers who would ask, “Well, if we give you this, how about the Asians, the Native Americans, Russian Jews, and later Armenians? You are asking for special treatment.
• That leads to the question, what is a minority?
• What is an ethnic minority? Or, for that matter, a Latino and should they all be given equal time?
• Who is going to determine the curriculum and the pedagogy?

My own opinion is that Mexican American Studies deals with identity, skill development and critical thinking. Its development has to have internal checks and benchmarks in order for it not to become one more senior problems class. Our community deserves more. Up until now education has been exclusively the study of white America; it must be expanded to reflect the nation’s diversity but at the same time attack the dropout problem.

The truth be told, few educators know much about Mexican Americans and they only think that they know about black Americans. We have the opportunity to educate the majority society, which will not easy. It is also educators who control our universities, and it is the universities who have contributed to this ignorance and kept us in this state.

Is a Victory Really a Victory? We are supposed to have diversity in academe; however, we are more segregated than the community at large. Only 3-5 percent of the faculties are of Mexican origin.

The cheerleaders say that Obama’s Immigration Order shows he is pro-immigrant, does it? If questions are not asked, we’d better get a supply of matches and light them – in case we are not able to stand the smell.